Risk metrics for the stock market deteriorated considerably in August 2015 as long term moving averages were violated, but snapped back for a furious rally that left a lot of traders and trend-followers whipsawed. But the problem with the S&P 500 was that its recovery and strong movement was largely driven by the FANG stocks (Facebook, Amazon.com, Netflix, Google), so what you had to do to get a clearer picture of market breadth and health was to look at the Equal Weighted S&P 500 index (symbol RSP). That would have made the picture more reliable and would not have subjected you to whipsaw back and forth around the buy/sell point around the moving averages.

In fact, it would have kept you on the sidelines and given you reason to think that the rally was an illusion and was for suckers. The snap back to earth when rallies fail can be breathtaking, and 2016 unfolded with a -9.15% loss for worldwide market indexes and a -7.88% loss for the S&P 500, for the worst start in stock market history.

The Warren Buffett Indicator shows that the market is still overvalued. The profit recession is on the horizon. US manufacturing is contracting.

The only thing holding up the stock market's hope for a rebound is the continued strength in US jobs growth. As of January 17, 2016, numbers were still healthy:

...and with VIX at elevated levels, there's a good chance a short term trading bottom is getting near. The only tricky part, as always, is guessing where the VIX will top out. Picking tops and bottoms is hard; it tends to go farther than people expect: 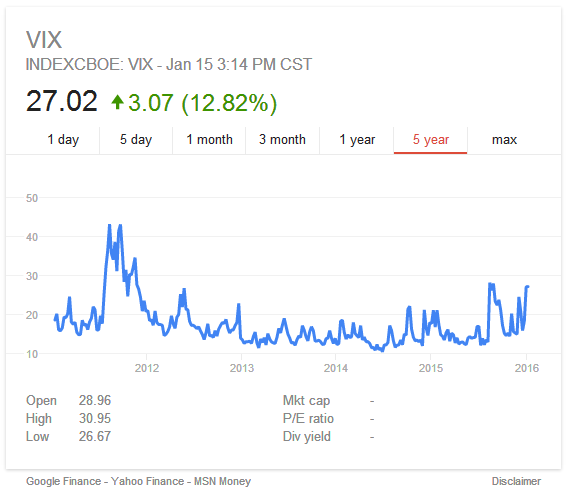